Aurania has discovered copper-silver in sedimentary layering in its Lost Cities – Cututcu Project in Ecuador.  This type of copper deposit is also known as “red-bed” copper, amongst others.  Sedimentary-hosted deposits have produced about 20% of the world’s copper; the best-known are:

Copper-silver has been found in carbon-bearing layers within a red bed sedimentary rock sequence in an area measuring 23km north-south by 7km east-west in Aurania’s properties in Ecuador.  Similar copper-silver mineralization has been described by Hannan Metals some 300km south of Aurania’s Ecuador property in northern Peru and by Max Resources from the border area of Colombia and Venezuela in the north – some 2,000km.

The association of copper with silver, without notable enrichment in other metals through this belt, is unusual – the exception being the Kupferschiefer and parts of the Central African Copper Belt.  The copper-silver mineralization is present as malachite, chrysocolla, tenorite, chalcocite, cuprite and native copper, and is hosted by bleached, reduced sandstone and carbonaceous shale.  The strongest mineralization is found in strata with fossilized plant fragments (Figure 1). 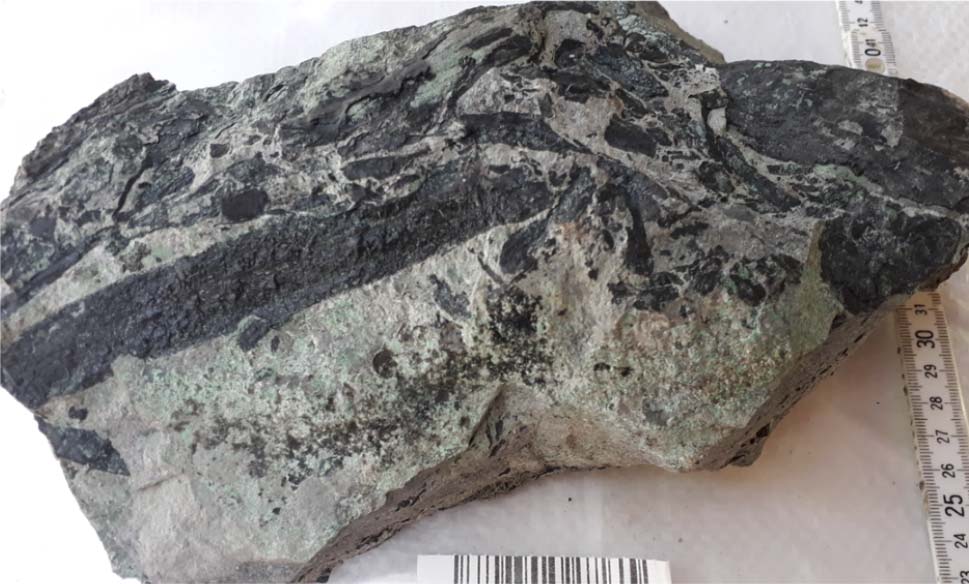 These giant deposits occur in a unique geological setting; at the top of red bed sequences, which are porous and permeable oxidized sandstones (as you see today in the Grand Canyon) where they are capped by organic carbon-rich strata – typically carbon-bearing shales, limestones or volcanic ash layers. These deposits formed in inland seas like today’s Baltic or Caspian, which periodically evaporated completely, to be flooded again over geological time.

These deposits typically form sheets of high-grade copper that extend over large areas. At Kamoa-Kakula, the copper is concentrated in specific parts of elongate zones within the sedimentary layer like popsicle sticks laid out on a sheet of paper.  To give an idea of potential scale, the Kakula “popsicle stick” alone contains 38Blbs of copper.  Copper in the Kupferschiefer occurs with silver – making it the biggest historic producer of silver in the world.  The Central African Copper Belt, in turn, has the largest by-product cobalt resource in the world. 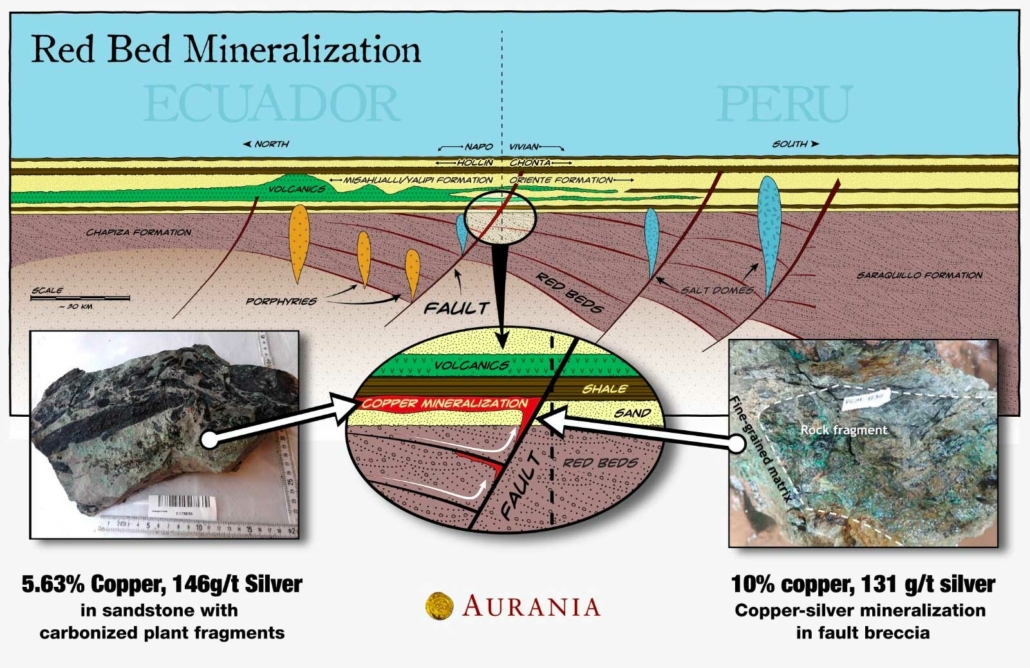 An additional potential source of copper in the red-beds of the Chapiza Formation is from the subvolcanic and plutonic rocks that intruded the area in the Mid- to Late-Jurassic (Figure 47).  The heliborne geophysical survey undertaken over the Project by Aurania shows a large number of magnetic features that are interpreted to be Mid- to Late-Jurassic intrusions, and if a proportion of these are mineralized porphyries or IOCGs, very significant quantities of copper may have been introduced into the red-bed system from this additional source. Since IOCG systems tend to develop in extensional tectonic settings, they may have developed contemporaneously with the basin in which the red-beds accumulated.  The porphyries are considered to have formed in a late Jurassic island arc that was superimposed on the mid-Jurassic rift basin in which the red-beds accumulated.

The genetic model developed for the sedimentary-hosted mineralization, with copper and silver leached from sediments and introduced from hydrothermal fluids related to mineralized porphyry or IOCG systems, was maintained in solution as copper-chloride; the chloride derived from salt layers and domes. The copper- and silver- rich brine would have maintained these metals in solution until such time as they were driven laterally along more permeable units within the red bed sequence in response to tectonic compression that would also have inverted the extensional basin.  Fault zones would have provided the cross-stratal permeability that allowed the warm metal-rich fluid to ascend until it came in contact with reduced strata that induced precipitation of copper and silver (see Figure 1).