“Epithermal” gold deposits refer to a type of gold deposit that formed close to the surface at the time that the deposit formed. Epithermal deposits in southeastern Ecuador, of which Lundin Gold’s Fruta del Norte deposit is an excellent example, formed approximately 150 million years ago. We expect epithermal deposits in Aurania’s Lost Cities – Cutucu Project to have been formed around the same time as Fruta del Norte. 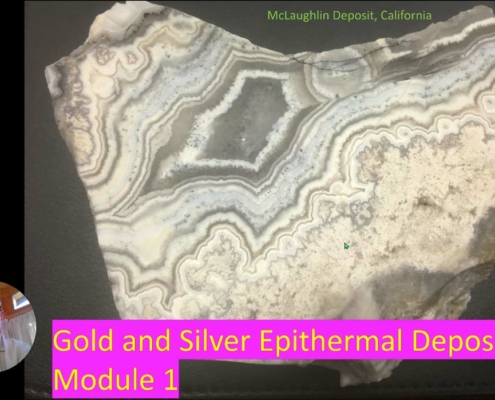 The surface expression of epithermal deposits is geyser fields and hot springs – Yellowstone National Park is a perfect example. Veins, some of which are gold-silver – bearing, form beneath the geysers and hot springs. The layers of silica that accumulate in a geyser– hot spring environment – known as “sinter” terraces, are hard and are quite resistant to erosion. Even where the systems are old, as in Aurania’s Lost Cities – Cutucu Project area, vestiges of these silica layers provide a crucial way of identifying the location of the old land surface, and mark the areas in which hot fluids welled up to the surface. The target for gold-bearing veins lies beneath these layers of silica.

Usually, the upper part of the veins that lie immediately beneath the sinter, do not contain gold; they contain elements that travel in the hot, rising water, mainly as gases, such as mercury, antimony and mercury (volatile elements). These volatile elements precipitate with the silica that forms the epithermal veins. These elements are very useful in exploration since they provide an indication that the vein may contain gold at depth – and they are known as “pathfinder” elements for gold-silver exploration. Gold deposition in epithermal veins comes about when the rising hot water boils – and since boiling occurs at more or less the same depth beneath the surface – the gold-rich zone of epithermal veins lies at more or less the same level beneath the old land surface – that is marked by sinter. At depth, beneath the gold-bearing zone, these same veins contain a higher proportion of silver, lead and zinc.

The steeply incised topography of the Cutucu Cordillera where Aurania’s project is located will have cut through the epithermal systems formed 150 million years ago, exposing the silver-lead-zinc zone of veins in the deepest valleys, and the gold-rich interval on valley flanks. We assume that the historic mines of Logrono and Sevilla were developed where the gold-rich interval of veins was exposed by erosion for the Colonial Spanish to have found them.

Aurania’s exploration has encountered vestiges of sinter over extensive areas in the southern part of the Property, specifically at the Crunchy Hill, Yawi and Apai target areas. We used pathfinder elements to try to define where the epithermal vein systems might be located beneath the sinter-level, and scout drilled the Crunchy Hill and Yawi targets.

Drilling at Crunchy Hill and Yawi showed that we intersected the upper parts of an epithermal system and that the gold-bearing part of the system, if present, would lie at greater depth.

From this experience, Aurania’s team decided not to scout drill the Apai target just yet, as originally planned but, instead, to move north to the central part of the Project to the Shimpia-Tiria target area where there is very little evidence of sinter.  The sinter at Shimpia-Tiria is believed to have been eroded, exposing the underlying vein system that is a simpler target for drilling.  Soil sampling has identified strong enrichment in pathfinder elements over a very extensive area that we believe is indicative of an underlying vein system.  Tiria, the targets defined by enrichment of pathfinder elements and minor gold detected in soil sampling, that are arranged around the central core of the Shimpia silver-zinc-lead target, is now the priority target for drilling.  What we learn from the scout drilling of Tiria will be applied back into further exploration of the Crunchy Hill, Yawi and Apai target areas in due course.