The integration of diverse data sets is crucial to successful exploration. Most deposits are not that easy to find, and their subtle “signature” usually shows in multiple datasets – hence our focus on combining and overlaying data in geographic information systems (GIS).

The principal data layers at our disposal: 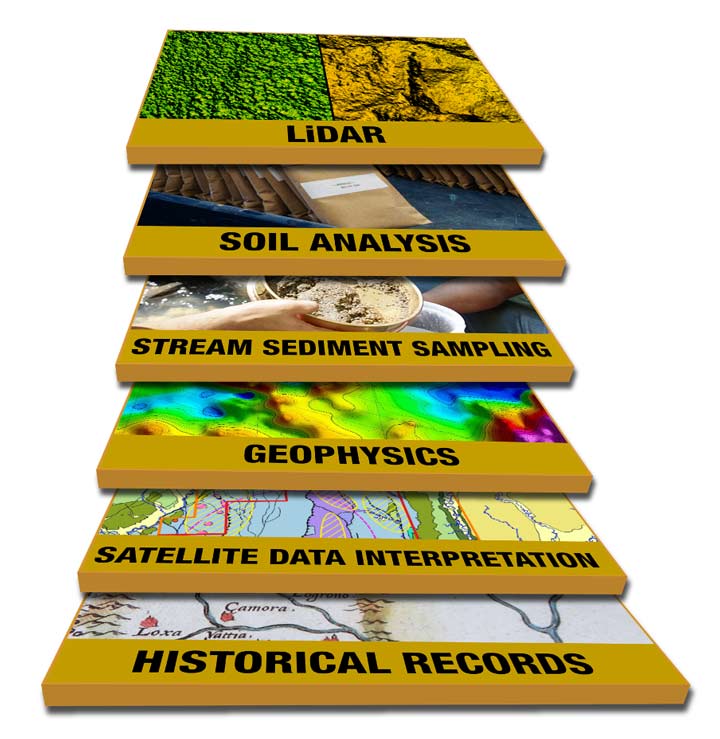 Reports and maps from the archives that have been studied and incorporated into modern maps. Much of this information is contradictory, so the information is weighted based on its source and credibility. Generally, for example, we put more weight on information from the time that the Logrono and Sevilla mines were actually in operation versus the summaries that were written later.

Despite the Lost Cities – Cutucu Project being covered in dense rainforest, satellite imagery can still be used to map geology and structure.  This is an important component of our exploration since we know which rock layers (stratigraphy) are more likely to contain certain styles of mineralization, which could contain deposits.  “Structure” refers to faults, folds and fractures.  Faults and fractures provide the plumbing for metal-bearing fluids that rise from depth, to interact with reactive layers in the stratigraphy; they are the means by which mineralizing fluids move.

Once a geological fault has developed, it is always a zone of weakness, and it will generally move repeatedly over time like the San Andreas Fault.  We try to identify faults that were active during periodic intervals when metals were being transported from rising magmas.  And we need to find the faults that constituted good pathways for the metal-bearing fluids to flow up and along.  If we can work out the tectonic stresses imposed on the Cordillera de Cutucu at a given time, we can predict which faults will open to provide good fluid pathways, and which will close and thereby constitute poor plumbing for the metal-bearing fluids.  We pay particular attention to the location of deposits relative to the faults that they are controlled by in our region, because this allows us to work out which faults are most likely fertile.

For example, Lundin Gold’s Fruta del Norte gold-silver deposit in the adjacent Cordillera del Condor, formed against a north-trending fault which opened during the mineralizing period, allowing the deposit to form.  And the copper deposits at San Carlos and Panantza formed immediately adjacent to a northwest-trending fault which was moving in such a way that the magmas with which the porphyries are related, could rise close to surface, resulting in copper precipitation.  Faults provide the main plumbing for copper-silver – bearing fluids related with sedimentary-hosted mineralization to rise and accumulate beneath impermeable, carbon-bearing layers that would cause the metals to precipitate.

We undertook a heliborne geophysical survey over the entire property in 2017.  The survey covered, not only Aurania’s project concession area in Ecuador, but the surrounding area as well, which has given us an invaluable perspective on trends throughout the concession area.  This survey identified additional areas that Aurania would likely apply for when the government opens the country for mineral concession staking.  The magnetic and radiometric survey that we undertook is constantly being reworked in light of findings from the field.  Magnetic data is particularly useful for the identification of porphyries, many of which have magnetic cores.  Magnetic data is not particularly useful in directly identifying epithermal gold-silver deposits, but it may provide useful information that could lead to the identification of these deposits indirectly.  Radiometric data is useful to detect certain types of alteration – minerals that are formed around deposits in response to the hot fluids with which the metals were transported.

The main thrust of boots on the ground is stream sediment sampling in which fine silt is collected in streams and analyzed to detect metals and pathfinders that have washed in from the catchment area that each stream drains.  The data undergoes statistical analysis to determine the concentration at which each metal or pathfinder element is anomalous, or atypical, which may be due to enrichment in the source area of the stream. These data sets are combined with the other data sets to identify and prioritize areas of interest.

The dense jungle cover and thick soil makes it difficult to identify the source of enrichment of metals detected by stream sediment sampling.  In drier environments, this follow up is normally done by geological mapping. The tropical soil developed in the Cordillera de Cutucu, and in the adjacent Cordillera del Condor, provides a very good sampling medium in which many metals are dispersed.  Soil sampling, along ridge crests where the sampling is quick, is usually followed by sampling in a grid to identify the source of metals more precisely.

LiDAR (Light Detection and Ranging) is an active remote sensing system that can be used to measure vegetation height across wide areas.  LiDAR provides an image of the jungle floor with the trees and vegetation “stripped away”.  In early 2020, seven priority areas were covered by a LiDAR survey and there is a plan in place to cover the remainder of the Lost Cities – Cutucu Project in Ecuador.  The aim of the LiDAR survey was to directly identify possible Spanish Colonial mining workings and to provide additional geological information.  Our goal, for instance, is to be able to image quartz veins directly.  The LiDAR survey used data that was received from approximately one point per square metre.  Hence, a quartz vein that is 5m to 10m wide, and is more resistant that the surrounding country rock, may be visible as a slight ridge, imperceptible even on the ground, but visible in a LiDAR image.  Aurania’s team is currently working on the interpretation of the LiDAR data we have to date in conjunction with other data sets.

Field work that typically goes hand-in-hand with soil sampling is the identification of minerals that have developed in response to the nature of fluids that typically transport metals. These fluids are usually very much hotter than the rocks that they are migrating through, and their composition may be very different from that of the host rock.  Specific minerals develop in the country rock in response to the fluids that are associated with metals.  Alteration minerals tend to be arranged concentrically around metal deposits and so can be used to vector towards the part of the system that is most likely to contain the highest concentration of metals.  Since the nature of the minerals varies with temperature, they provide important information about the nature of the deposit that they enclose.  For example, alteration minerals provide a very quick guide as to whether the target was associated with hot fluids in the case of a porphyry, or relatively cool fluids in the case of an epithermal system.  Alteration minerals may be difficult to identify in the field or in core, and we use shortwave infrared spectroscopy as an aid in consistently identifying key minerals.  The spectroscopy may also identify temperature vectors within a specific alteration mineral band – information that is not identifiable by eye.

Once the available data has been assembled and analyzed, the next step is to drill. “Scout drilling” is a term used in Ecuador for drilling that is undertaken to prove the merit of a target.  Scout drilling is intended to answer the question as to whether a target is real: i.e. was the type of alteration expected from the target type, encountered? Were there indications of mineralization of the types sought?  And, in a best case scenario, significant mineralization is intersected.  Scout drilling is a key exploration step in a property as large as Aurania’s Lost Cities – Cutucu project, where there are numerous targets and one of our biggest challenges is prioritizing the sheer number of targets.  The intent of scout drilling is to keep the drill rig moving from one target to the next, even if a significant mineralized hit were to be made. This logic is designed to ensure that Aurania’s exploration doesn’t simply focus on the first area of significant mineralization intersected, but instead, it allows us to determine if the next target might be better.  This then puts the Company in a position in which we can decide which targets we would prefer to keep within Aurania and which would be better joint-ventured to other companies.

Our scout drilling is conducted with man-portable drill rigs to minimize the environmental impact.