The Cordillera del Condor – the eastern foothills to the Andes in southeastern Ecuador – hosts a well-endowed mineral belt that contains 26 million ounces (“Moz”) of gold and almost 40 billion pounds (“Blbs”) of copper in NI43-101 resources held by various companies (Figure 1).  The Lost Cities – Cutucu Project (“Project”) lies along-trend of that mineral belt and so our exploration is focused on finding the same types of deposits that occur in the Cordillera del Condor (Figure 2). 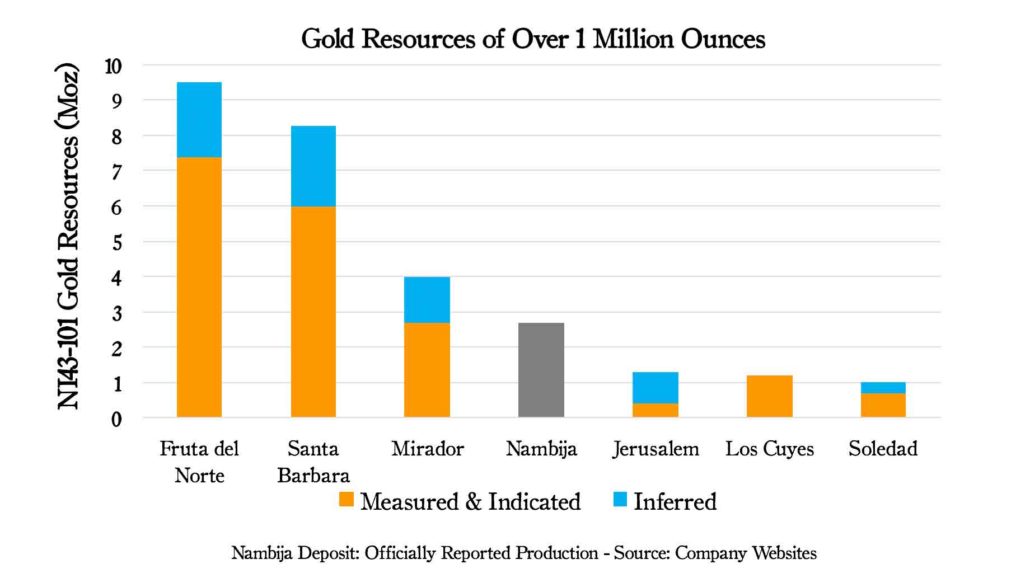 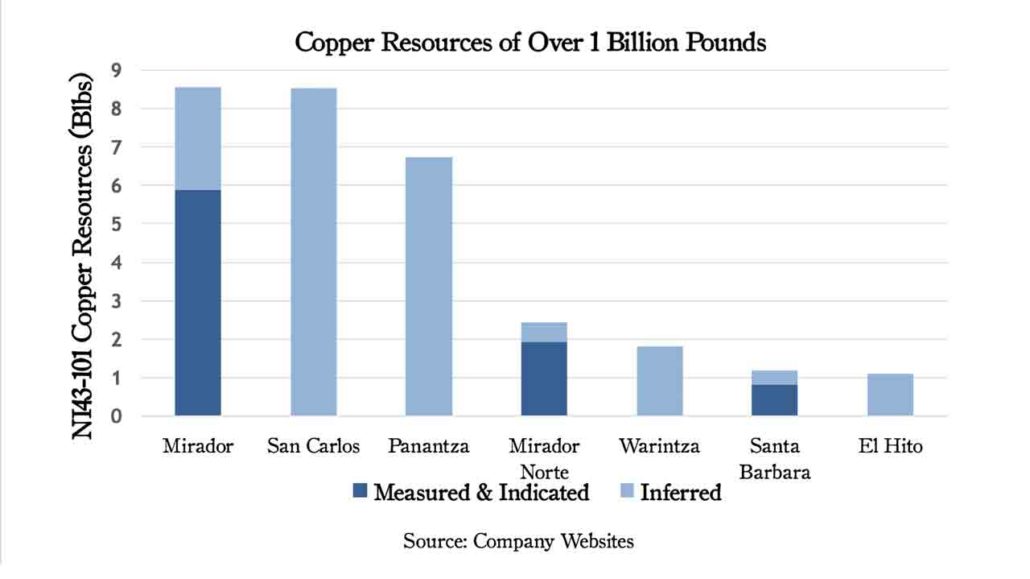 Figure 1.  NI 43-101 resources of the larger gold and copper deposits in the Cordillera del Condor in southeastern Ecuador.

Many of the mineral deposits in the Cordillera del Condor are related to a 200km-long granitic body, the Zamora Batholith, which is the probable source of magma and metal for the associated porphyry copper and copper-gold deposits, and related epithermal gold-silver and gold skarn deposits.  Aurania’s new aeromagnetic data suggest that a similar granitic batholith lies beneath the central part the Project area. If this interpretation is correct, this Cutucu Batholith may have provided a similar source as the Zamora Batholith for porphyry, epithermal and skarn mineralization in the Project area. 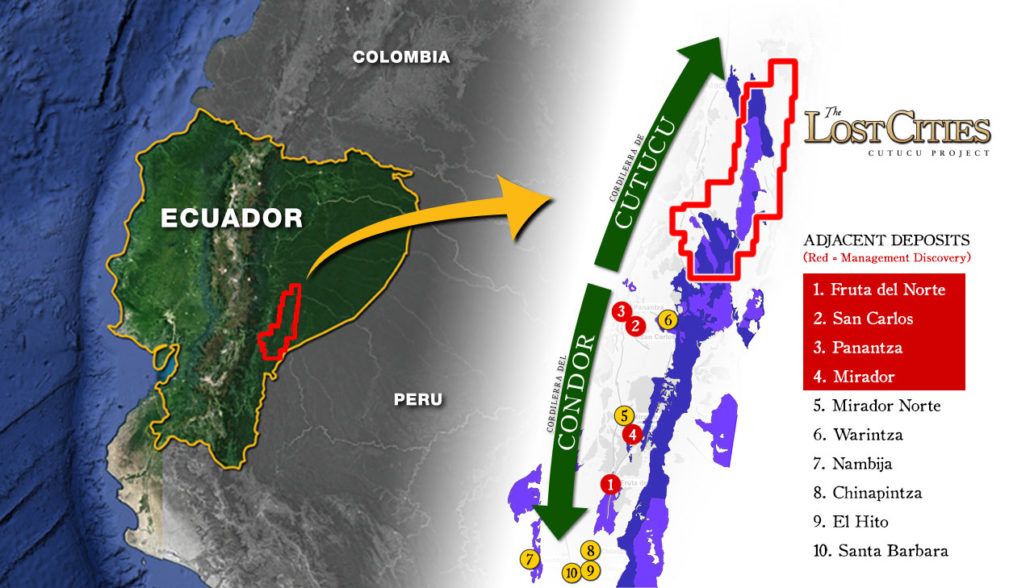 Figure 2.  Map showing the geological continuity between the Cordilleras del Condor and Cutucu in southeastern Ecuador.  The location of major gold and copper deposits in the Cordillera del Condor are shown, along with the outline of the concessions (in red) that constitute the Lost Cities – Cutucu Project. 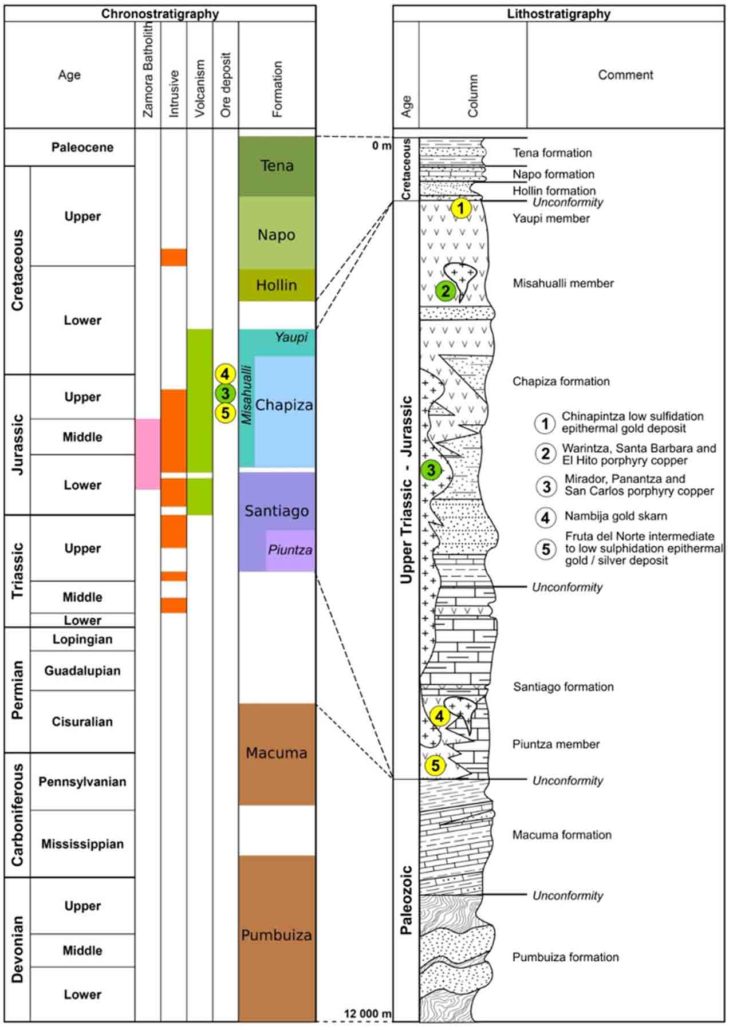 Figure 3.  Stratigraphy of the Cordilleras del Condor and Cutucu in southeastern showing the stratigraphy with which the principal deposits or deposit-types are associated in the Cordillera del Condor.  The blue- and purple- coloured parts of this stratigraphic column correspond with the purple-coloured rock sequences shown in Figure 2.

“Crunchy Hill”, originally named “Latorre B”, is being lined up as the first target to be scout-drilled in Aurania’s Lost Cities – Cutucu Project.  Crunchy Hill forms part of the 100 square kilometre Latorre target area that was identified as an area of interest through stream sediment sampling (Figure C1).  The mix of metals and other pathfinder elements (see Notes below) that are enriched in streams in the Latorre area are typical of epithermal systems – a class of gold-silver deposits that form within a few hundred metres of surface.

Crunchy Hill was identified by naturally-occurring, but elevated, levels of arsenic, antimony, silver, molybdenum, selenium and thallium in very streams that drain a small part of the Latorre target.  Follow-up work identified silica-rich rocks and chalcedonic silica veinlets that are commonly found in the very upper parts of epithermal systems. 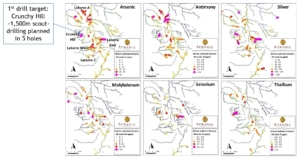 Soil that has formed under the deep tropical weathering conditions in the area provide an excellent sampling medium since their high iron and clay content captures metal and pathfinder ions weathered from underlying mineralization and released into water flowing through the soils.  A soil grid was cut into the jungle and was sampled.  Assay results showed that elevated metal and pathfinder elements occur in an area over one kilometre in length.  The most elevated metal concentrations lie in elongate corridors that correspond with the areas of silica-rich rocks.  These linear corridors are believed to be the upper parts of a vein system.  Molybdenum is known to be exceptionally stable in these tropical soils since it is captured by the soils as soon as it is released from the underlying rock by weathering.  Therefore, molybdenum provides a reliable anchor that should faithfully represent the position and shape of the underlying vein system from which it was derived.  The confinement of other pathfinder elements, such as antimony and mercury, to coincident corridors with molybdenum adds to the conviction that the corridors represent mineralized structures at depth (Figure C2).

In contrast to the narrow corridors of molybdenum, antimony and mercury, other elements such as naturally-occurring arsenic and iron occur in broader areas of the soil grid – typical of epithermal systems where these elements are concentrated, not only in the veins, but in the enclosing rock as well.  The concentration of manganese close to the pathfinder elements is unusual (Figure C2)– and highly informative – since it typically occurs as a halo to mineralization in many deposits.  An exception to this rule is “intermediate sulphidation” epithermal deposits, of which the Fruta del Norte deposit in Ecuador is a prime example, where manganese occurs in a carbonate mineral, rhodochrosite, at the core of the mineralization.

Figure C2. Summary of distribution of pathfinder elements in soil at Crunchy Hill.

Clay minerals form in the host-rocks in response to the temperature and composition of the hot fluids that rose up fractures to form veins.  Spectral analysis of these clay minerals provides a reliable guide as to the temperature at which they formed as well as the composition of the mineralizing fluid.  Clay minerals formed in close proximity to the silica-rich rocks at Crunchy Hill formed at low temperature, indicating that the very highest part of the epithermal system is exposed at surface. The target for gold, which is notably absent from the rock samples taken at surface, is likely to be several hundred metres deep, where the hot fluids that were carrying metals upward in fractures, intersected chemically reactive rocks such as limestone layers, or permeable rocks, such as tuff (volcanic ash).  Recent field work has focused on determining the depth at which the vein system identified by the soil sampling intersects layers of chemically reactive limestone and permeable tuff at depth below the elevated values encountered in soil sampling at surface.  Scout drilling will be aimed at the point where the veins cut these layers that should be preferred host rocks for gold-silver mineralization. 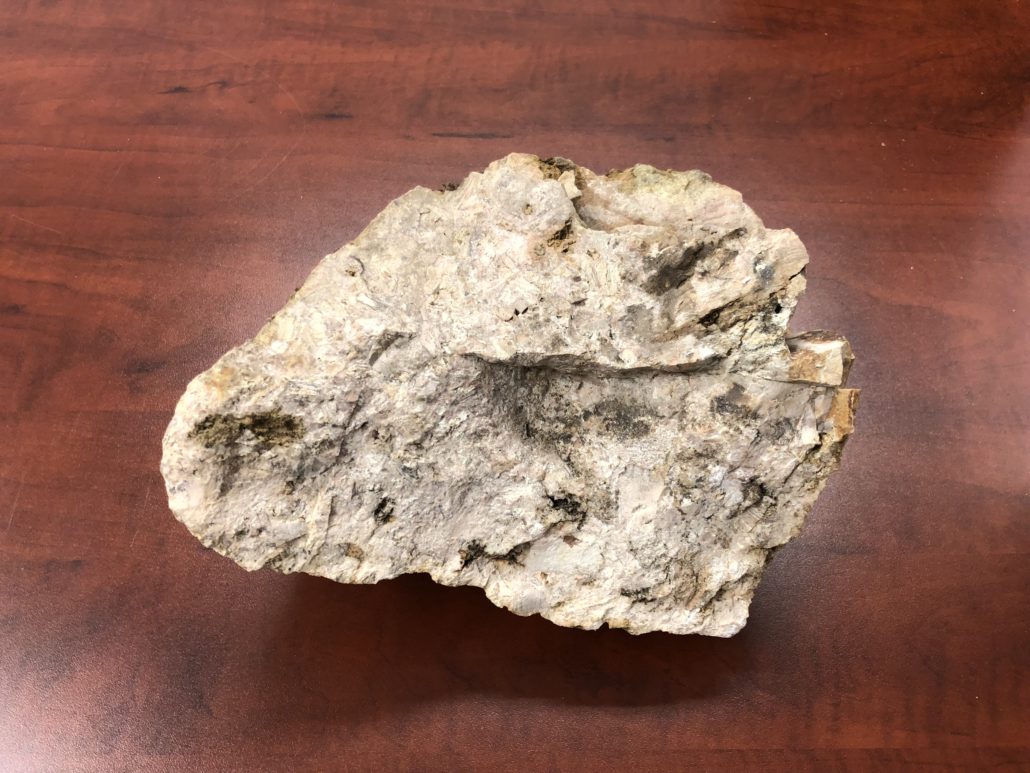 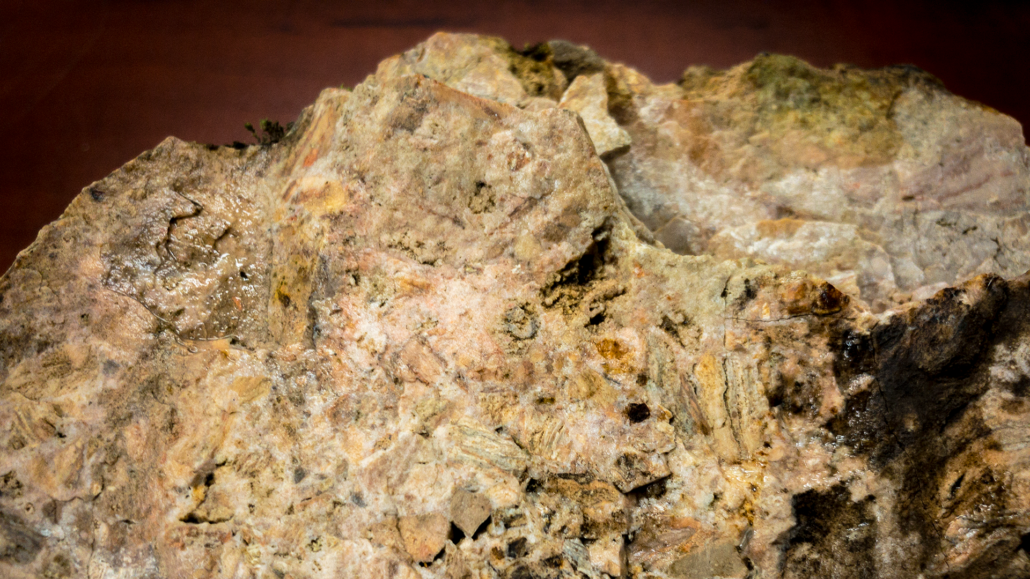 Phreatic breccia showing that the breccia consists of many types of silicified rock with distinct banding in some fragments. 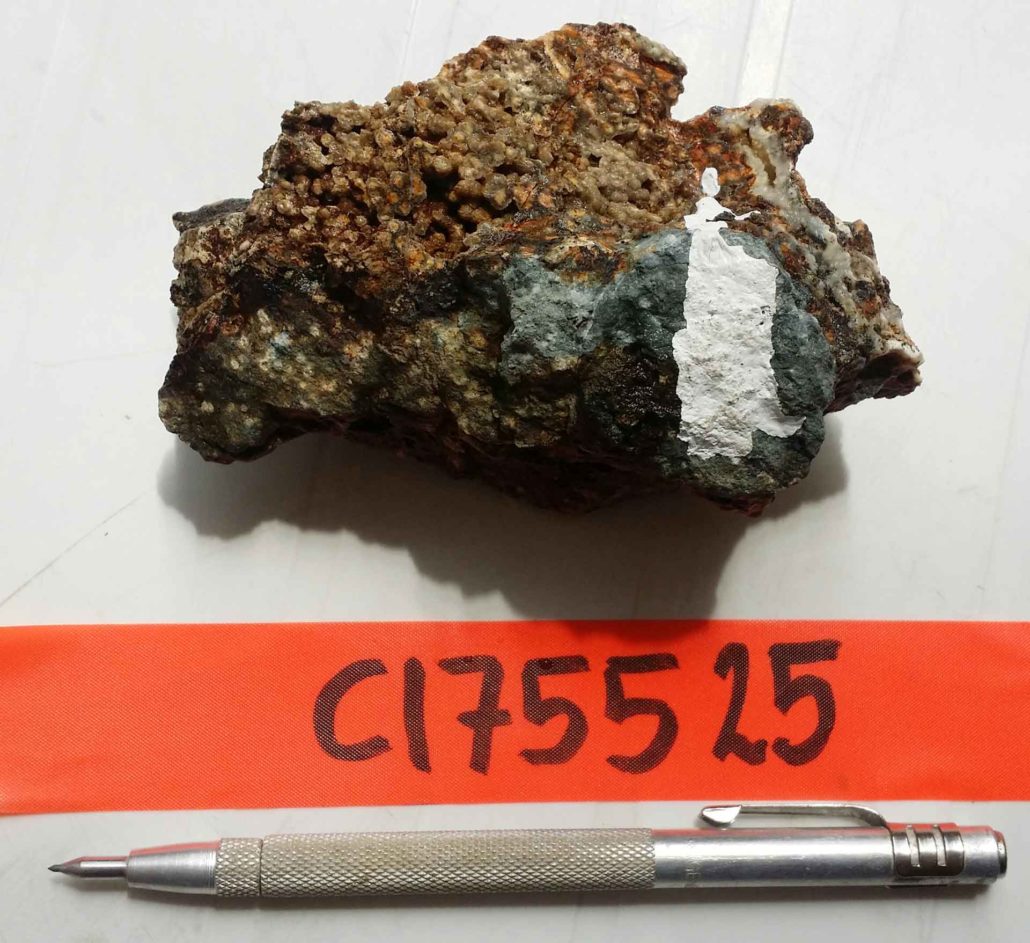 Aggregate of white chalcedony spherules (< 3mm), with structure of numerous concentric layers. The center of many spherules has an opaque white color and is probably made of opal. 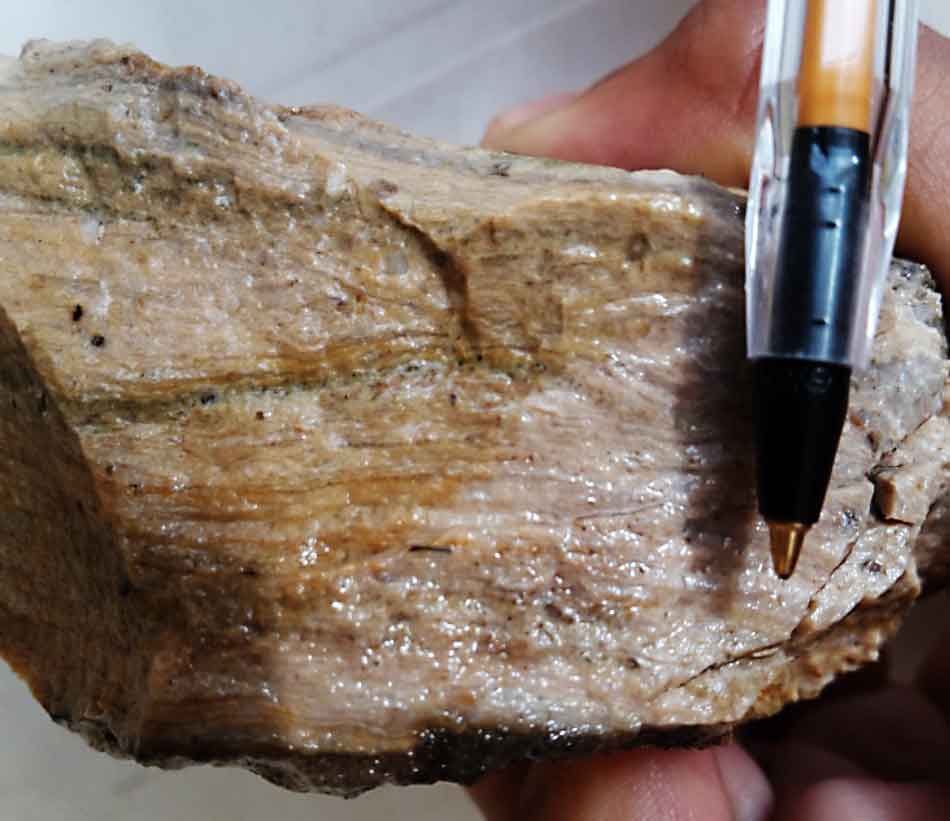 Characteristics of the Fruta del Norte (“FDN”) deposit located along geological trend in the adjacent Cordillera del Condor are being used as the principal exploration guides for the Latorre West target. The concentration of pathfinder elements in stream sediment samples and by chalcedonic silica boulders in streams in the Latorre West target are similar to those that led to the discovery of a gold-silver deposit 125 metres below surface at FDN (Figure L1). The lack of gold in the stream sediment samples from the FDN target was consistent with modern-day hot-springs in New Zealand in which silica gel, a precursor to chalcedonic silica, is precipitating at the surface while geothermal wells show that gold and silver are accumulating a few hundred metres below. 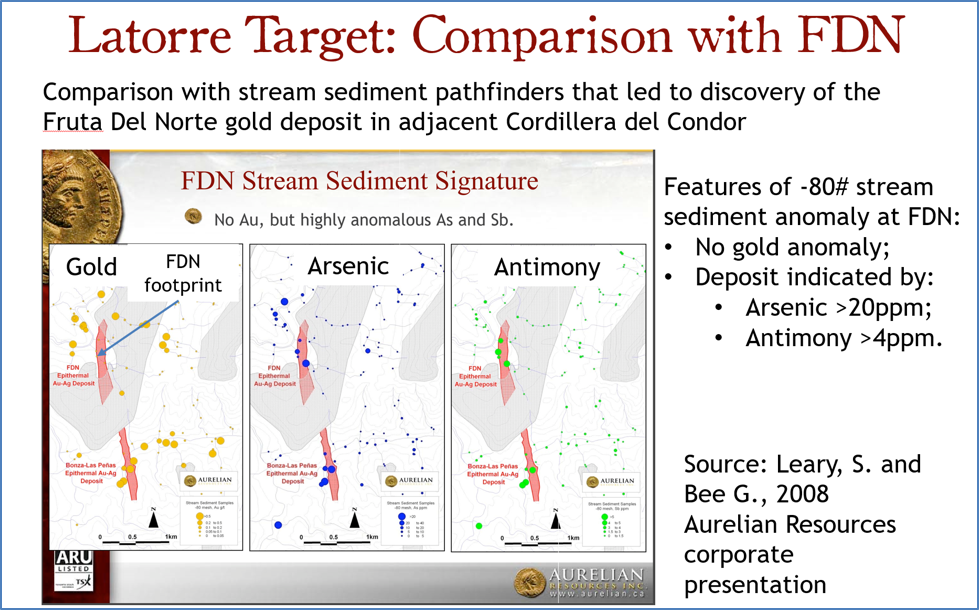 Figure L1.  Summary of stream sediment sample values from the Fruta del Norte target, below which the gold-silver deposit was discovered through exploration drilling in 2006.  Note that the naturally occurring arsenic and antimony values are very similar to those found in Aurania’s Latorre Target.  Note that there is no gold in sediment from the streams right over the deposit.

High concentrations of zinc and selenium occur in addition to the arsenic, antimony, silver and molybdenum in silt in streams within an area of approximately 3.6km2. Sphalerite, a zinc sulphide mineral, has been found in outcrops of black, carbon-rich shale within the target area. Sphalerite occurs with pyrite and minor galena, in fine bands within the shale, along with bright yellow secondary minerals of cadmium.

The exploration target concept at Latorre East is not yet clear. 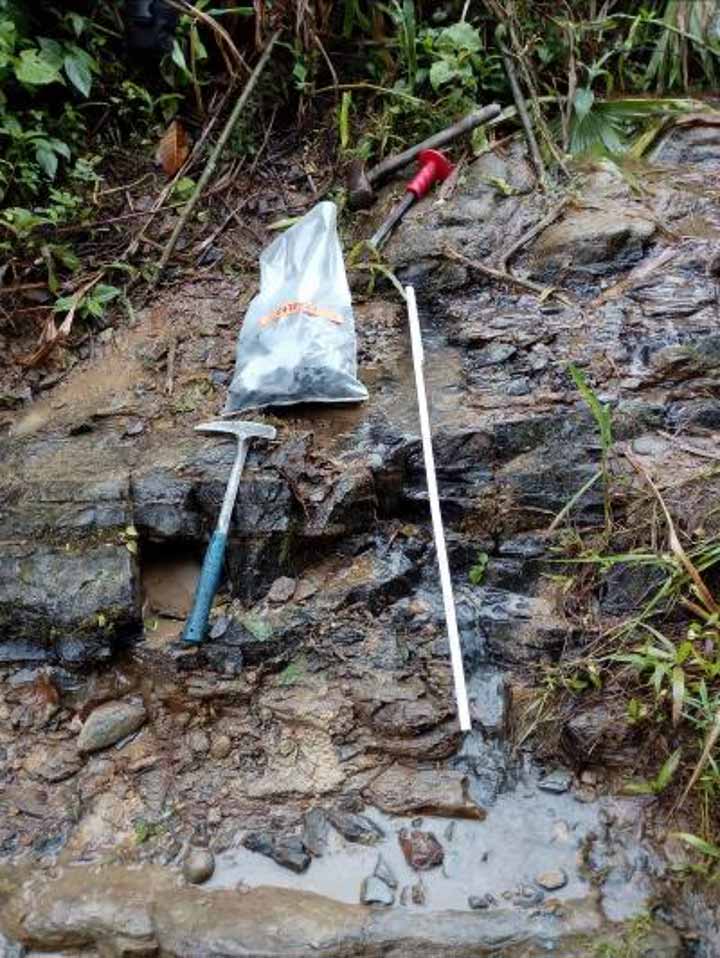 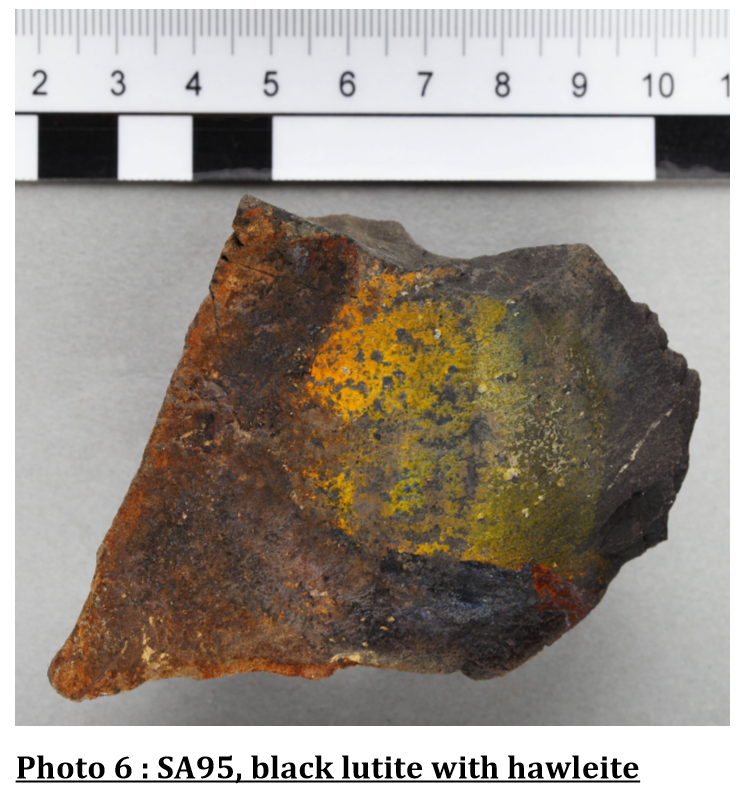 The Awacha target was defined from the geophysics data collected in the extensive survey that was completed by Aurania in Q4, 2017. The target area consists of ten magnetic centres 0.5km – 2km in diameter, aligned in two northeast trending zones 5km-8km long (Figure A1). The northeast-orientated trends in the magnetic data are disrupted by many northwest-trending features that are interpreted as faults. The centres of discrete magnetism are partially bordered by magnetic lows that may be caused by structurally-controlled alteration in which magnetite may have been replaced by non-magnetic clay minerals. Two of the magnetic peaks evident in the magnetic data were independently identified as possible granitic centres – possible porphyries – in satellite imagery. 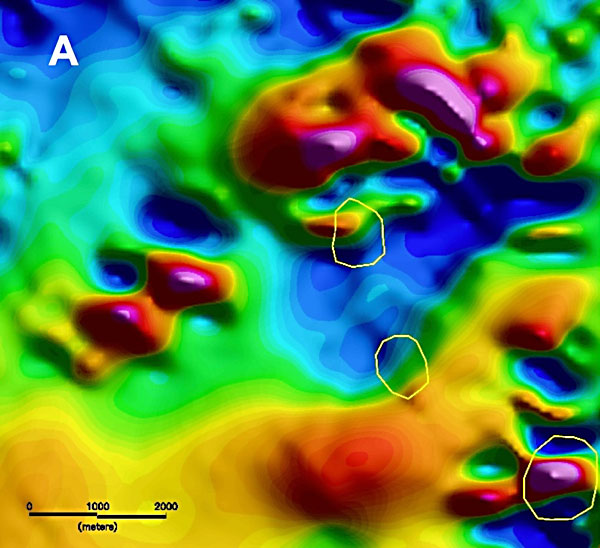 The size and intensity contrast of the magnetic centres that make up the Awacha target are similar those of known porphyry gold-copper and copper deposits in the adjacent Cordillera del Condor, that lies along geological trend.

Many of the mineral deposits in the Cordillera del Condor are related to a 200km-long granitic body, the Zamora Batholith, which is the probable source of magma and metal for the associated porphyry copper and copper-gold deposits, and related epithermal gold-silver and gold skarn deposits. The new aeromagnetic data suggest that a similar granitic batholith lies beneath the central part the Project area. If this interpretation is correct, this Cutucu Batholith may have provided a similar source as the Zamora Batholith for porphyry, epithermal and skarn mineralization in the Project area.