Aurania’s Lost Cities – Cutucu Project is found in the southeastern part of the Republic of Ecuador, in the Province of Morona-Santiago.  It consists of circa 208,000 hectares in 42 concessions occupying the central part of the Cordillera de Cutucu.  The concessions extend approximately 95 km along the Cordillera.

The Cordillera de Cutucu is contiguous with the Cordillera del Condor to the south, together forming foothills on the Amazon-side of the Andes mountain chain.  The cordilleras Cutucu and Condor are separated by the valley of the Santiago River, which is the only river which breaches the divide and flows to the east, into the Amazon River system.  The two cordilleras are essentially one geological and geomorphic feature.  They represent an uplifted “back-arc” rift basin of Jurassic age, into which numerous porphyry bodies and their volcanic counterparts have been emplaced.  This rift basin extends from Peru right to the Colombian border and beyond.  In the southern part of Ecuador, the original rift basin consists of three steps that have been uplifted to different extents:

In the Cutucu, where there has been less erosion, epithermal gold vein systems should be better preserved; the best area to prospect would be the central spine of the cordillera where erosion should have removed most of the cover rocks, but not be so deep as to expose copper porphyries. The Santiago and Chapiza Formations, which host the down-dropped Fruta del Norte deposit and other deposits in the Cordillera del Condor, are present throughout the Project Area.

Oil companies have reconnaissance mapped the Cutucu since the 1920’s, because its stratigraphy is the same as the Pastaza Basin to the north, and inferences can therefore be made about the geology of the buried basin, 4,000 metres below surface.  The Cutucu itself contains some oil seeps and has been drilled in a few places, but the rocks are outside of the “oil window” because of uplift, and offer little to no potential for oil and gas.  The mapping by the oil companies right up to the 1980’s however has been key for this project, because Aurelian geologists recognized the nature of the host volcanics to Fruta del Norte in 2006 through 2008.  Aurania has used this knowledge for advantage and acquired all the similar and most likely areas of identical volcanic rock.

The Cordillera de Cutucu forms part of the Northern Andean Jurassic Metallogenic Belt (“NAJMB”) that extends from 3° north in Colombia to 5° south in Ecuador and northern Peru. The Belt contains clusters of porphyry copper, gold-copper skarn and epithermal gold deposits.

Modern exploration only started in the Ecuadorian segment of the NAJMB in the mid-1990s, focused on the Cordillera del Condor, and resulted in the delineation of 19 million ounces (“Moz”) of gold, 61Moz of silver and 9 million pounds (“Mlbs”) of copper in measured and indicated resources, with an additional 7Moz, 30Moz and 22Blbs, respectively, in inferred resources

Deposits in the Cordillera del Condor are hosted by Upper Triassic to Late Jurassic – Early Cretaceous rocks (Figure 2). The lower part of the Triassic Santiago Formation contains tholeiitic basalts that formed during a period of extensive continental rifting, while the upper sequence of volcanic rocks are subduction-related, calc-alkaline lavas that were linked to development of a Mesozoic volcanic arc – an early analogy to the present Andean mountain chain. The gold-copper skarns of the Nambija deposit and the Fruta del Norte gold-silver deposit formed within the Piuntza Member that constitutes the lower part of the Santiago Formation.

Table 1.  Summary of NI43-101 resources in the Cordillera del Condor. 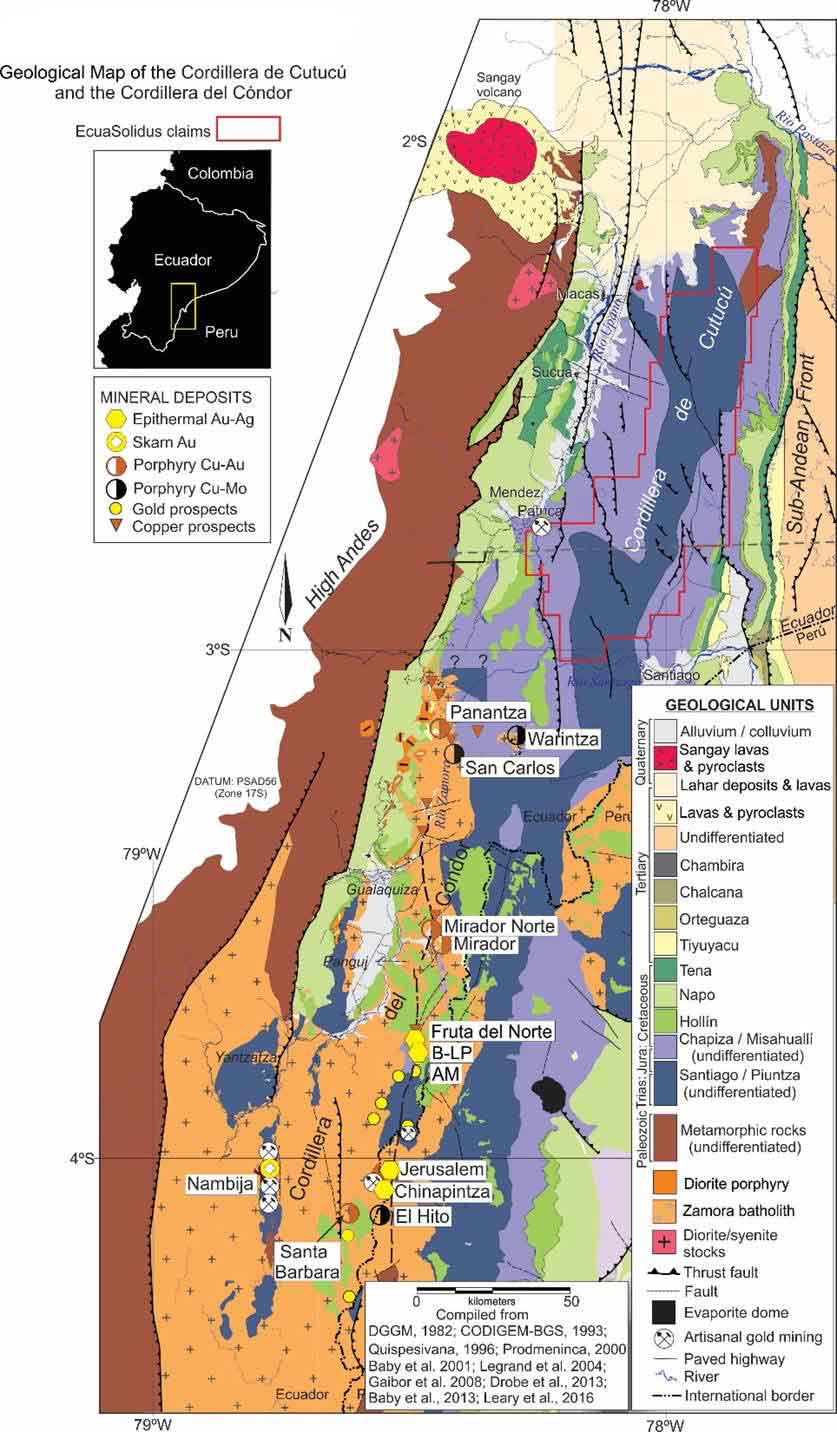 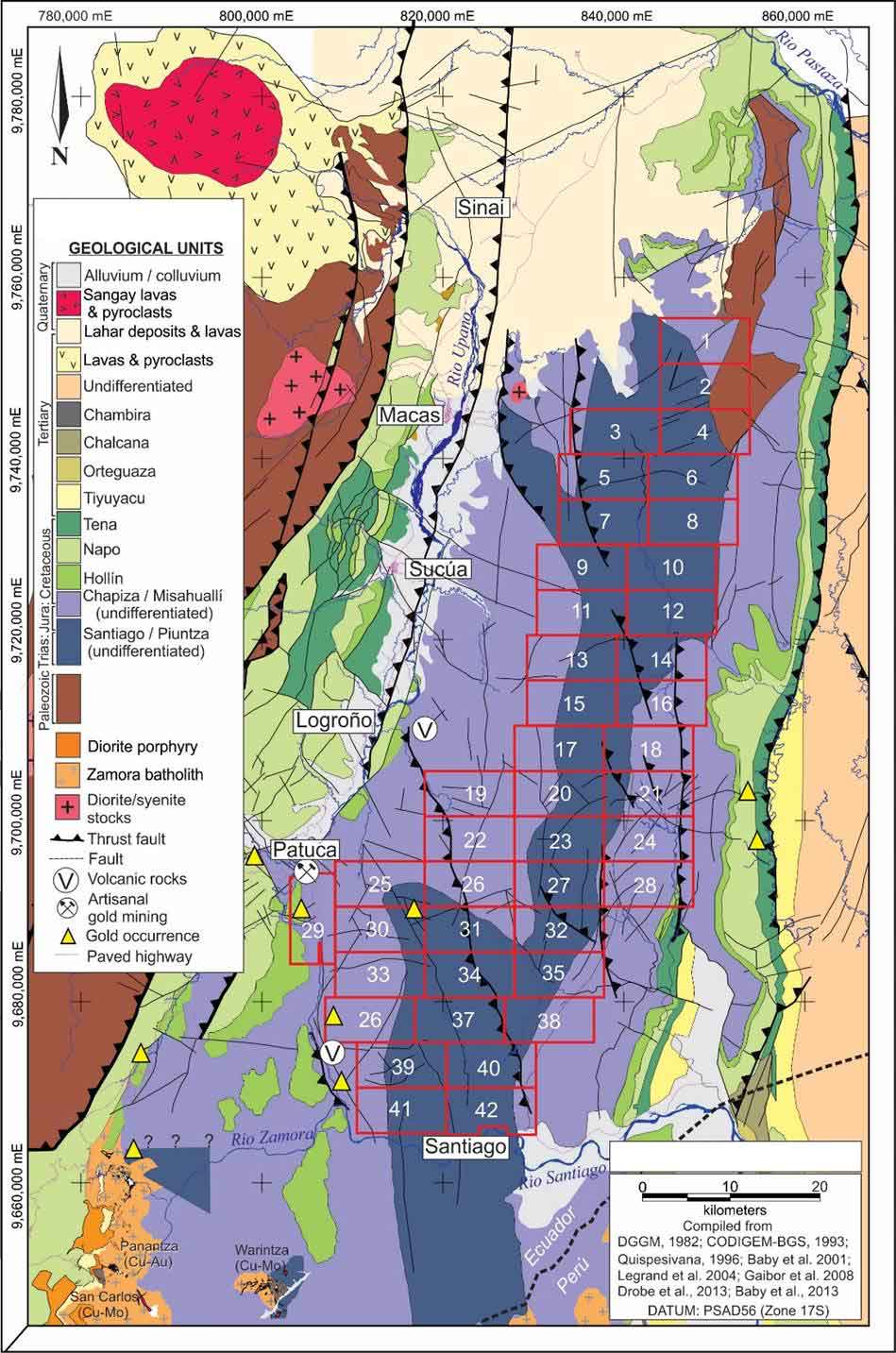