The majority of Aurania’s Property lies within the 344,002Ha (CARE, 2012; Rivandeira Torres, 2012) Kutukú-Shaime Protected Forest area (Fig. 1). This Protected Forest area was formally declared by official register No. 476, and ministerial resolution No.402, dated July 3rd, 1990. Despite the implication of the name, these forest areas are not “protected areas” in the sense of national parks or nature reserves. Ecuador’s Protected Forests are natural areas comprising public-, private-, and/or community-owned lands and are created to facilitate the management and protection of river basins and associated resources.

Despite the implication of the name, these forest areas are not “protected areas” in the sense of national parks or nature reserves. 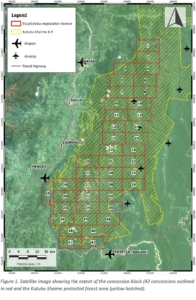 Ecuador’s Protected Forests are natural areas comprising public-, private-, and/or community-owned lands and are created to facilitate the management and protection of river basins and associated resources.

These areas are open for mineral exploration and mining under Article 9 of the Environmental Regulation for Mining Activities, which imposes more stringent permitting and land management protocols for Advanced exploration. During “Initial” exploration, the concession-holder can do basic exploration, which includes “scout drilling” from up to 20 drill platforms that can have a maximum size each of 6 metres square. Scout drilling provides the opportunity to test an exploration target to determine whether there is mineralization of potentially economic grade.

Once that goal has been accomplished, and the concession-holder wishes to undertake more formal drilling – on regular grids, for resource definition and estimation, for example, the concession enters the “Advanced” exploration phase in which a more comprehensive environmental baseline study must be done prior to the resource drilling being done. Concessions are up to 5,000Ha in size. Due consultation with local stakeholders is required for exploration work planned in protected forests, and this is done with each community to obtain permission to work in its territory.

The Environmental Register, which is required to be obtained from the Ministry of the Environment and Water before work can be undertaken in a protected forest area, was obtained in 2017 and updated in 2019. The required basic forestry inventory has been undertaken and has been approved by the Ministry of the Environment and Water.
Aurania’s main access to the mineral concession area is a paved national road along the Santiago River (Route E40) on the southern and southwestern boundary of the concession block and via light aircraft to existing airstrips in the interior and by helicopter. Our Environmental Register stated that we planned to construct heliports up to 0.5 hectares (approximately one acre) in extent. Our drill camps are also constructed such that they fit between the large trees, minimizing the clearing of vegetation. 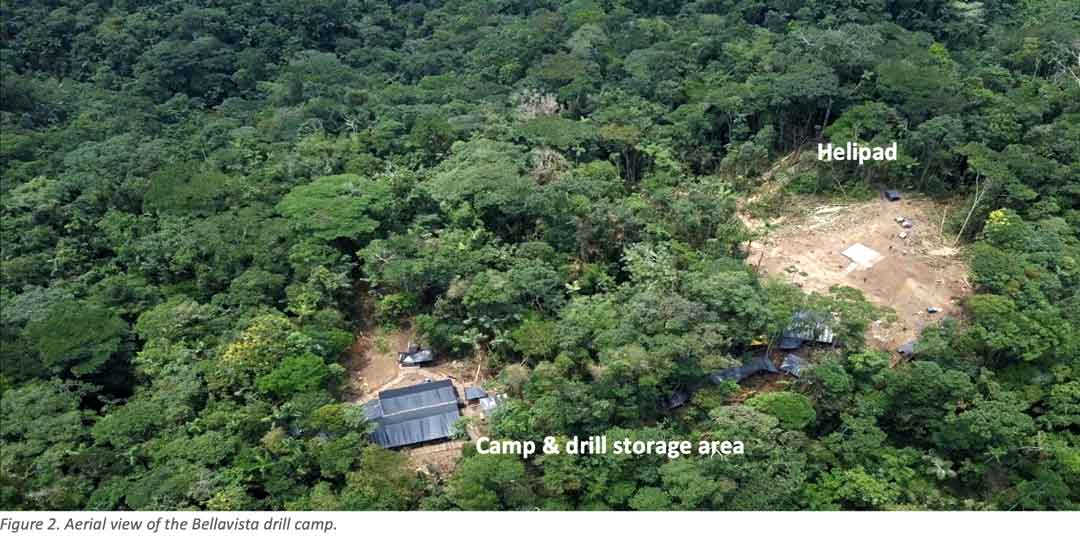 We avoid making roads, cognizant of the fact that the very access provided by a road provides people to develop properties along the road, usually resulting in deforestation. To date, Aurania has not constructed a single road on the property. We assist the communities to maintain their airstrips in workable condition and we use these access hubs for our exploration teams to hike to the areas where their work is focused.

The drill rigs that Aurania uses are modular and are man portable. We started work in the area moving the rig between drill sites by hand, but that has proved to be inefficient and we have started moving the rig by helicopter: the costs of the move are comparable, but rather than taking an average of nine days to move the rig between drill platforms, the helicopter can get it moved in three days which allows us to drill at a faster rate and therefore for our exploration to be more cost-effective.

The paths that we cut through the jungle for access between drill sites are required, as per our Environmental Register, to be up to 1.5 metres (4 feet) wide. To avoid erosion, and to leave improved access in the area for the local communities, the paths are lined with logs from fallen trees. No live trees are ever used to line these pathways.

A key to the protection of biodiversity is to help relieve the pressure due to hunting by the local Shuar people and helping to minimize pollution related to there being no waste management system in place in the remote communities. Hunting of animals by the local people can be discouraged if people have other, more convenient sources of protein and food such as an indigenous superfood called Sacha Inchi (Plukenetia volubilis) which was previously a staple in the diet of the Shuar people, but it was somehow forgotten. See Aurania’s website for further details http://www.aurania.com. Income earned by the local people also relieves the hunting stress on the environment by providing the economic means to produce food move conveniently through small-scale farming initiatives that are also described on Aurania’s website.

Efforts to create sustainable work include the potential for drill camps to be handed over to local communities for environmental tourism bases once they are no longer used by the Company. In addition, Aurania is working with the Ministry of the Environment and Water to create a shelter and quarantine area where wildlife that has been injured on the road or has been confiscated by authorities tasked with enforcing laws related to wildlife trafficking, can be housed until fully recovered, and then released back into their natural environment. It is hoped that the lengthy negotiations conducted in 2020 will result in implementation of the refuge centre in 2021.