Drill Sites and the Environment 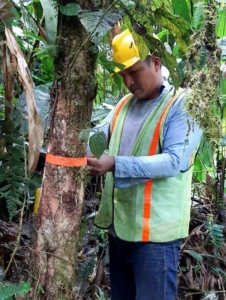 A community member measuring the diameter of a tree trunk in an area in which a drill pad is planned.

Baseline Species Studies – Once Aurania’s exploration team has identified a site from which they want to drill a target for gold, copper or silver-zinc, the environmental team moves in to do a count of species of fauna and flora with help from the local community. There are restrictions on the number of trees of certain diameters that can be felled for a platform. This often results in the platform being shifted slightly to fit between large trees. This “negotiation” as to a platform’s site requires tight communication between the exploration and environmental teams.

The platform for a scout drilling program can be up to 6 metres (18 feet) square. In the “Initial Exploration” phase, which is the phase that all of Aurania’s concessions are currently in, we are allowed up to 20 drill platforms per concession area. Aurania’s environmental management plan, which was approved by the Ministry of Environment and Water in 2019, allows us to cut trees over 10cm in diameter at each drill site. An environmental baseline study is done at each platform and involves recording and measuring the diameter of trees greater than 10cm in diameter. Other plant species are also counted. If endangered trees are encountered (these are typically those that are valuable for wood), the platform is shifted so that they do not have to be removed. Restoration will include seedlings of these trees if there is evidence of endangered species in the area. 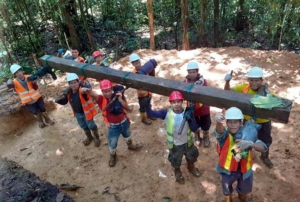 The first beams used to stabilize the drill rig arriving at a platform.

Mist nets are used to survey bird and bat species, and traps are set for small mammals and reptiles. Once the species are recorded, the birds, mammals and reptiles are released back into the environment, outside of the immediate area of the platform.

Frogs are captured and injected with a small spot of dye that is detectable under ultraviolet light. This enables us to return to site after the drill platform has been restored to monitor the number of tagged frogs to assess the impact of the activity on these species. Finding the same number of frogs that were tagged would mean minimal environmental impact. Finding none would raise concern about our impacts and finding some tagged individuals is a good sign because we expect that some would have fallen prey to predators. Motion-triggered cameras are also set up to record the presence of larger animals. 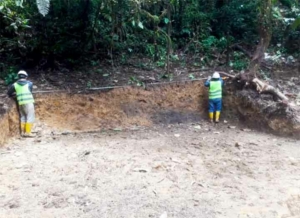 A completed drill pad ready for the arrival of the drill rig.

During the environmental baseline study, seeds of the various species are collected by the local community for planting in the nursery where they are tended and then returned for the environmental restoration.

No roads have been constructed for the drilling: the drills that we use are modular and can be moved by hand. Scout drilling at the first two sites (Crunchy Hill and Kuri-Yawi) were accessed from a paved road, while the drill rigs used to investigate other targets were transported to the general area by helicopter, and from there by hand. The access paths are allowed, as per Aurania’s environmental management plan, to be 1.5 metres (4 feet) wide, and are typically lined with wood exclusively cut from fallen tree trunks. The lining of the paths with tree trunks helps to minimize the development of deep mud and also protects the land from erosion. 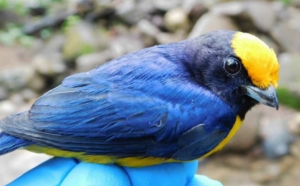 Birds are captured in mist nets enabling reliable identification of the species. 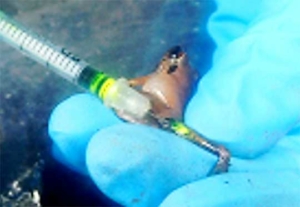 Frogs are injected with a tiny bit of dye that is visible in UV light, allowing the environmental team to return to the site later to count the marked individuals. 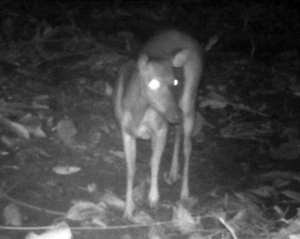 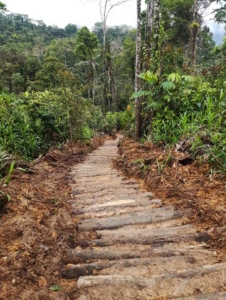 Log-paved paths mitigate the development of debilitating mud and also prevent erosion. The logs are all cut from fallen and dead standing trees. 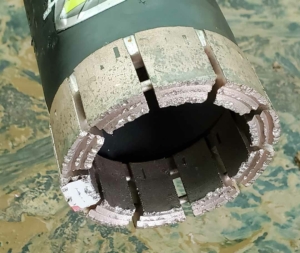 A drill bit is the diamond-encrusted tungsten steel ring that rotates to cut the rock. The cylinder of rock core gradually moves up the center of the core bit as the bit moves down through the rock.

Aurania’s exploration drilling relies on a ring of industrial diamond–encrusted steel: as the diamond-encrusted ring rotates, it makes a circular cut in the rock, and as it advances, it produces a cylinder of rock that’s called core.

The diamond-encrusted ring is called a drill bit. The bit is attached to a threaded steel pipe that is rotated by the drill machine, which rotates the drill bit that cuts the rock. As the hole deepens, a steel pipe – called a drill rod – is threaded into the top of the drill rod that’s in the drill hole. That top rod is rotated by the drill machine, which rotates all of the rods that are in the hole as well as the diamond bit that’s attached to the deepest drill rod. The drill bit continues to make its circular cut in the bedrock while 3-metre-long drill rods are added at the top of the drill hole. 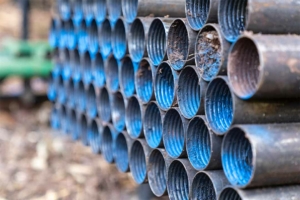 Threaded steel tubes – drill rods – stacked, ready to be attached, one by one as the hole deepens, forming the drill string that transfers the torque of the drill rig to the diamond bit.

The drill mechanism is hydraulic, and the power comes from diesel motors that are arranged in series, with more motors being added for deeper drill holes. Combining motors to provide the power needed is key to these drill rigs being light enough to be moved by hand. The drill operation requires careful handling and storage of diesel as well as regular maintenance of the motors. Quarterly emissions tests are done on the motors to ensure that we are minimizing our environmental impact.
The friction of the drill bit cutting the rock requires cooling by water that is pumped down the hole and this water is circulated back into a series of tanks in which the sediment – or mud – from the hole, settles before the water is pumped down the drill hole again. Biodegradable lubricant is mixed with the water to reduce the friction of the drill rod column against the rock wall of the drill hole. 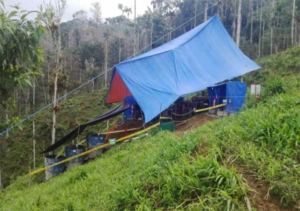 Water used to cool and lubricate the core bit and the drill string gravitates through settling tanks to remove suspended mud before being recycled in the drill hole.

The water for the drilling is rainwater collected in large plastic sheets and channeled into 2,000 litre tanks, as well as being drawn from local streams once the Ministry of Environment and Water has checked that the stream can sustain the volume of water needed for drilling without significantly affecting downstream users. Water quality is monitored ideally for six months prior to the start of drilling to provide a baseline against which results of tests taken after completion of drilling can be compared. This test work on samples taken from above the offtake point, as well as downstream of it, and which is monitored by the Ministry of the Environment and Water, as well as the local communities, provides transparent communication of the results. All tests related to our drilling have shown no contamination from the drill sites. 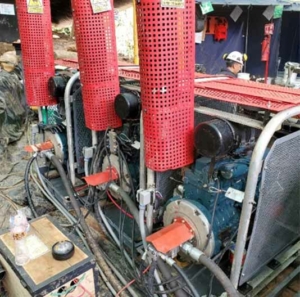 Small diesel motors are combined in series to provide the hydraulic power required by the drill rig.

The muddy water that has circulated through the drill hole flows into a series of tanks from which the mud settles before the water is sufficiently clean to be released back into the environment. The mud is placed in a geomembrane-lined depression covered by a plastic roof, which allows it to dry. The mud is assayed for contaminants and heavy metals. Should elevated levels of contaminants be found, due to its isolation in a geomembrane, it could be removed from the area and treated as necessary. The test work completed to date has confirmed that none of the drill sites have generated mud with elevated heavy metal content. 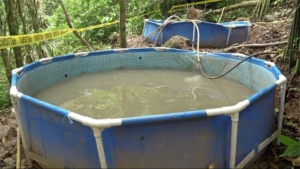 Rain water is collected in large collapsible tanks that can be drained and moved from one drill site to the next.

The first step in environmental restoration of a drill site starts before the drill platform is excavated – with the collection of seeds of species of plants and trees found on the site, and with the removal and storage of the layer of organic matter and leaf litter. Plants that will be used to restore the drill platform are already being cultivated in the nursery.

Once the drill has moved off a site, the soil is replaced. The soil in this tropical environment is clay-rich and is intensely leached of many of its nutrients. In fact, few of the roots of the massive trees in the tropical jungle penetrate deep into the soil because its lack of nutrients. The organic matter is replaced over the clay and seedlings from the nursery planted over the site in the proportion in which they originally occurred on the site.

Studies of the broader area often show that the prime hardwood species have already been harvested, and their absence from the tree-count of the site does not mean that they weren’t originally present. In these cases, seedlings of those hardwood trees are included in the restoration of the platforms in that area. The location of the hardwood seedlings is recorded with a GPS and is reported to the Ministry of the Environment in the description of the environmental restoration of each platform. The restored sites are monitored by members of the local community and any seedling species that die are replaced.